Toi knew the numbers on the scale were increasing, but didn’t realize how much until people at work started making comments.  She didn’t feel confident or sexy anymore.  She drove past the gym twice every day, but struggled to find motivation to actually workout.  “I wanted to work out, but had no energy or motivation to do so,” Toi said.  She scheduled an appointment with her primary care provider.  This appointment revealed early stages of weight-related medical conditions that Toi knew she didn’t want to live with.
At that point, Toi was 208 pounds (at 5’4″ tall).  Her doctor told her to lose 2 pounds a week for 6 months.  At the end of that 6 months, she had only lost 7 pounds, not the 40-60 lbs her doctor told her to lose.  That’s when her doctor dug a little deeper and discovered that Toi was suffering from depression.   “I was depressed and didn’t realize it.  It’s why I couldn’t lose weight.  My mother died in March of 2015 and, while I thought I had went through the grieving process, two years later, I had not.  I didn’t realize that I had shut down and stopped engaging with my family and significant other.  I thought just because I wasn’t laying in the bed and crying that I was okay.”  He referred her to therapy.
Toi also asked her doctor about Phentermine, as she had researched it online.  He referred her to Olivera Weight Management.  That’s when her story begins to brighten up.
“I thought Phentermine would be like the diet pills I had tried in the past that gave me that jittery feeling, but  I was wrong!  It gave me energy yes, but not that nervous energy.

Taking Phentermine and receiving the vitamin B-12 shot literally changed my life. 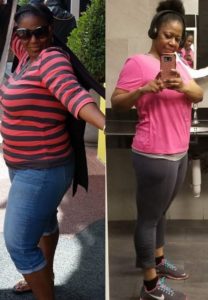 I begin feeling better mentally, I was motivated to go to the gym, it suppressed my appetite and I was able to eat right without being hungry!”  Toi now follows the Whole Life Diet recommended at Olivera Weight Management, which consists of whole foods.  She eats 5 small meals a day and exercises 3 times a week.
Toi went from 201 lbs to 171 lbs!  She has lost 30 pounds and is on track to lose 30 more!

“The best part of coming to Olivera Weight Management is the encouragement I received, how fast I was seen, and the excitement of stepping on the scale knowing I had lost more weight!”

“You have to be willing to put in the work and change your lifestyle, but Phentermine is a great tool to help you move forward with your weight loss goals.  If you are committed to this, you can succeed with losing the weight.  I feel like I got my life back!”

We use research-proven strategies, approaches and tools to help our patients achieve successful weight loss.  We offer a variety of services to meet your needs.  In our remote Nutrition Consultations, our Registered Dietitian develops a plan customized to meet your needs without you ever having to leave your home.  Phentermine, an FDA approved appetite suppressant proven to help patients lose weight, is available at Olivera Weight Management for patients who qualify.  We offer all services in a caring, supportive environment. For more information on pricing and our other services, please visit our webpage or give us a call at 773-327-6624.  Follow us on Facebook for free weight loss tips, recipes and more.

This site uses Akismet to reduce spam. Learn how your comment data is processed.